Own design Boeing C17 Globemaster III for PSS - near disaster

The C17 eventually got to the slopes in 2021, but it wasn't the best outcome unfortunately. All rigged and ready for launch, the chucking crew lifted her and started to walk to the slope's edge, whereupon it was spotted that one of the flaps had dropped. Hmmmm, odd. 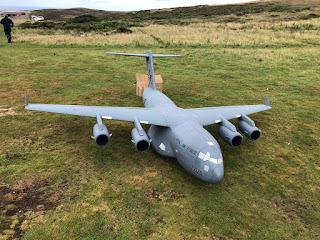 Putting the airframe on the grass, it was obvious something was awry as smoke was pouring out of the top hatches. Oh dear. To prevent an out and out burn-up on the slope-side, I quickly tore off the hatch and ripped the batteries out. The rain had started to come in at this point (another lovely Welsh summer) so I quickly de-rigged it and shoved it into the van, feeling rather let down after 5 years of build and endless hours of setup at home. 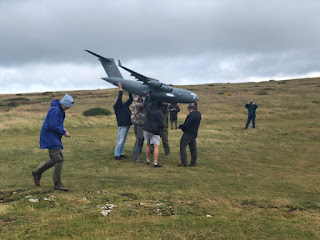 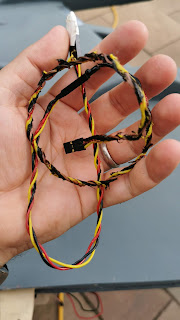 The post-mortem at home showed that the bottom of one of the Savox flap servos was quite severely melted, and also the loom had cooked up badly. The servo was either faulty or was somehow out of position trying to pull the flaps shut and pulled too much current in it's stalled state. To top it off, the brand new 10 channel redundancy receiver had melted solder from the battery input terminals blobbed everywhere inside, and was also a write off. Great.
The airframe was kicked into the bottom shed, servos removed, waiting for the early spring bonfires.
Fast forward 6 months, and I've stopped sulking a bit, and Simon Cocker talked me round into getting her airworthy again.  This time I'm using a redundancy bus to monitor flap servo current on the TX, and it also has resettable fuses if anything pulls too much current on each channel.  The servos are back in, and the engine and wing attachment method has been improved greatly, meaning I should get less angry putting it together.
So now everything is set and ready to go at the 2022 April PSSA meet - we shall see what happens!
Posted by Andy at 01:49