Last week Bob and I saw that there was an upcoming big SW wind, so a plan was hatched to get to the Orme as early as possible to get two maidens done. I got up at 5am and made the 3 hour trip with a car full of C17, to be greeted by a 55mph SW on the top of the rock. Wow! If she doesn't fly in this, she is definitely going in the bin. 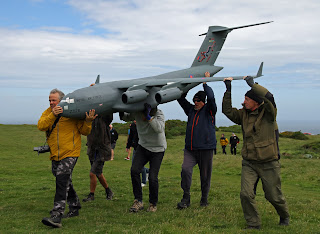 All rigged and ready (extra insulating tape to hold the engines on!), the hardy lads we'd corralled into meeting us there lofted the airframe above their heads, and gave her the heave-ho. The first launch showed some tail-heavy attributes, but nothing that couldn't be handled on trim, thankfully. A slight runaway in the dive, but not something that made me panic too much - I didn't even make any changes for the second flight. 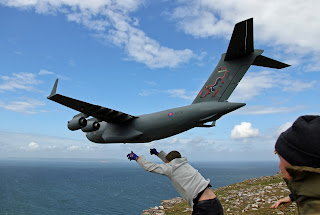 All in all, I'm very happy with her. Quite manoeuvrable, not too fast, fairly easy to land even without touching the throttle stick for the huge flaps. I did give the flaps a go on the front side and she slowed up very quickly without too much pitching - at least they're there if I need them!

The second flight was cut a bit short due to the backup receiver losing signal.  I still have no idea why this was, and can only assume it's something to do with the "beta" pre-release RB30 redundancy bus I was using.  I really wanted the RB in there to keep an eye on the flap servo current as it has that feature built-in, but I have since found smaller servo-current sensors made by FRSky that I can daisy chain off the telemetry ports instead.  I'll lose the battery backup feature, but by adding two separate receivers, I can mitigate that risk through them using different batteries and cross-controlling the aircraft for redundancy. 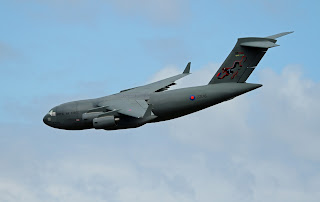 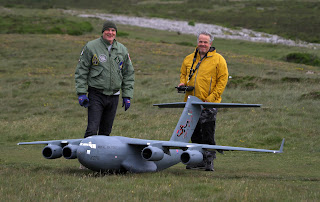 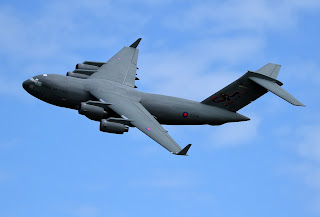