A fitting day to mention the Tiffie, as it's the 74th anniversary of D-Day.  On this day 74 years ago, the 2nd Tactical Air Force were heavily engaged over the skies of France with rocket and bomb attacks on enemy positions, and vehicles in front of the line of advance.

Eisenhower himself specifically praised the Typhoons - "The chief credit in smashing the enemy's spearhead, however, must go to the rocket-firing Typhoon aircraft of the Second Tactical Air Force... The result of the strafing was that the enemy attack was effectively brought to a halt, and a threat was turned into a great victory."

Heavy praise indeed for the aircraft and pilots

So, to the model then.  Everything is in primer, and I'm currently waiting for the pilot to arrive so I can finish off the cockpit installation.  In the mean time, I am getting some detail work done.

The radiator liner has been added (made from some coated kevlar flexible sheet) with thickened epoxy.  The back of the panel is indeed a funny shape - once finished it will have a stiffener to form it back into a shape rather than deformed as it is now! 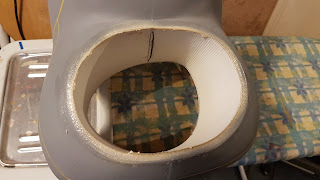 Trim tape has been added to the fuselage and wings.  This will get a coat of primer, then removed, which will add panel lines on the airframe.  Down either side of these will be rivets, burned into the paint and glass with a soldering iron and a special tubular tip. 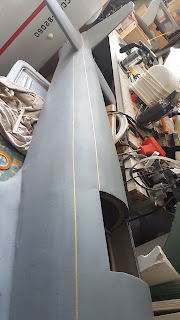 I've amassed some parts for the cannon installation too, more to follow on that after this weekend I hope.