The fin has now been clad, the elevator linkage soldered up an in place, and the exhaust fairings completed.  Quite close now for some more glass - as usual for me the whole bottom in one piece, then the fin, then the top. 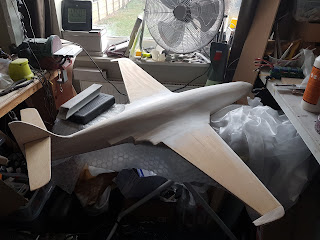 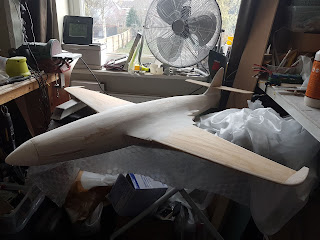 I've still to cut the ailerons from stock, as well as the elevators and rudder, but they don't take long at all, and will take longer to glass than shape.

AUW currently 1lb 9ozs, and I think the target will be another pound and a bit on top of that. If she ends up at 3lb, that'll be 19oz sq ft, which isn't too bad at all really.
Posted by Andy at 05:15 No comments:

Apologies for the lack of posting, but I've been busy and not getting around to taking photos during builds, when I have actually been able to get to building.

I've been getting some more glassing done, here Seahawk and Liberator parts: 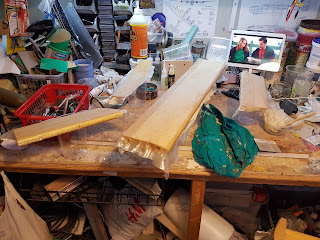 Out of shot are some Ilyushin parts (tailplane and fin) that were also glassed.  It's all coming along, slowly.

And here the underside of the Seahawk wings.  Just a bit of balsa behind the roots for the jet exhaust to add, then the whole fuselage can be glassed too: 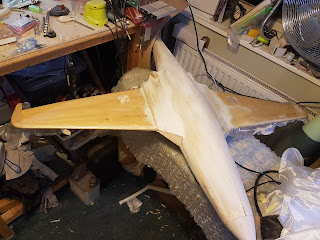 A new addition to the fleet is this Byron F20, which has never been flown and used as a static model only.  She will get some new home-made wings, and a respray ready for the slope: 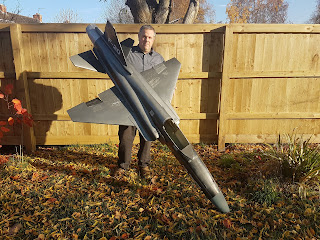 One of these F5 schemes I think: 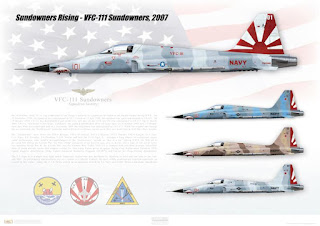 The Typhoon has progressed a little, and then gone back a few stages as some of the work around the cannon wasn't to my liking, so I've re done the cannon mounts.  All of the priming is complete now though, so it's just waiting for some garage time to get the spraying started.