The Sea Hawk is still in the planking stage at the moment, but is starting to get held up by other things not being done - namely the wings will need cutting / veneering / joiner tube installed shortly.  This is so the fuselage part of the joiner tube outer can be mounted level and true to the rest of the fus - an impossible feat once the top planking is in place!

OK and yes, another PSS model that I mentioned a while back is being built - the Su-27 Flanker from the Andy Conway plan.  I've had the plan and plastic parts for around 3 years now, so I've made a decent start.  4 days and 3 scalpel blades later, the wooden parts were all cut : 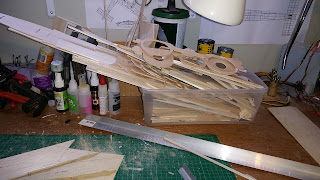 And after I'd re-cut the wing ribs (my photocopy of the plan was WAY off), the port wing is under construction : 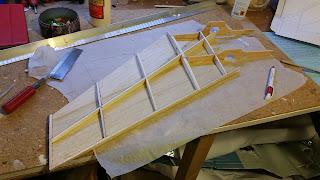 It's all coming along nicely, but there are definitely some boo-boo's on the plan I have - maybe they have been fixed in more recent versions? These errors so far include - TE not shown notched, though should be; solid lines shown on the plan, where there should be dotted lines (loads of places I've found this); false LE about 2 inches too short.  Nothing major as yet, but it has slowed things down here and there.

Oh, and here is Matt with his Flanker, alongside me and my Fulcrum :