I managed to brave the cold in the garage last night for spraying duties.  I brought the rattle-can of primer in doors and sat it in a sink full of hot water first though (brings the pressure up, and makes the paint runnier), then after a bit of last minute prep, shot the first base of primer onto the Flanker. 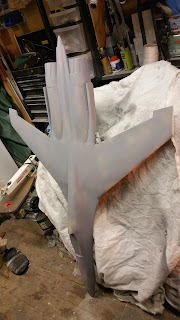 Not too bad I guess.  I left that in front of the heater to help set the paint, then brought it inside when it was dry to the touch and the stink of the paint had lessened.  So, roll her onto her back, and pick up on the black lines I'd drawn around the battery box.  Spot-on for location, which is nice! 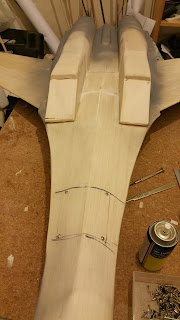 I then reinforced the underside of the hatch with some 1/64th" ply, added some mounting blocks inside the fus, then re-attached the hatch with servo screws.  I rolled her back over, and went at it with a strong light and the red stopper / glazing putty. 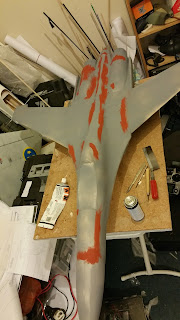 No real surprises - pretty much where I thought all the problem areas were, I found and filled.
Onto the next hatch - this time the receiver one. 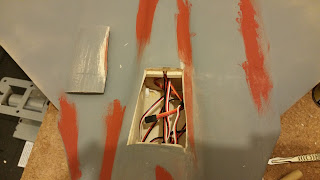 A slightly wobbly line on the RHS there!  I was distracted by a dog unfortunately, and my ruler slipped a touch.  Not a problem - it'll be hard to see once the camo is applied.  Again, spot on for location - there's all my servo and power wires - great.  A switch / charging jack will live in here next to the RX.  I added some blocks for support around the inside of the fus, but haven't decided on retaining method yet.  I think it'll be a hatch-catch in the hatch, with carbon dowels at the front.