Well, all foam parts are now cut for the first C17 (and some bits for the second one too), so some more woodwork-work is being carried out now.

First, the fin was cut into 3 pieces to hold the tail spars.  As the tailplane is quite wide, I didn't want the fin to flex (or potentially snap under severe oscillations) with side load from the tailplane - thus two 40mm wide liteply spars run uninterrupted from bottom to top.  The foam was Gorilla-Glued around these spars. 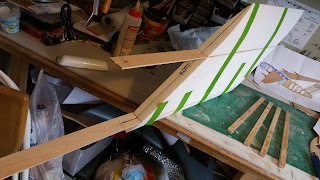 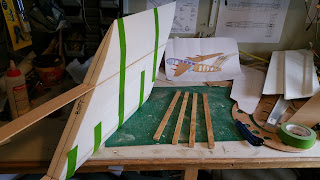 Same picture basically, at two angles.  Oh well.  You can see (just) in the second one, some holes bored through formers - they have all been treated thus now.  Lots of weight saves I hope!

The 4 big spruce bearers bracket the undercarriage pods can be seen too.  These will give a decent, firm structure under the skin of the aircraft for launching and landing on.

The main fus former that holds the wing spar has been hollowed slightly and reinforced around where the spar box fits. 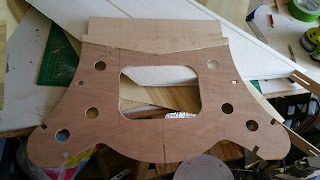 Net weight gain / loss is zero, so at least its stronger where it needs to be.