It's nice to come to work for a break!

Since Friday afternoon, I have put in about 25 hours in the workshop, readying aircraft.  Mostly it has been Albatross number 2 and 3, but also thrown into that a little fleet maintenance, workshop tidying, and work on my "project X" that is soon to be revealed. 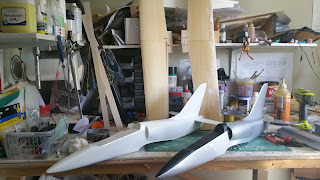 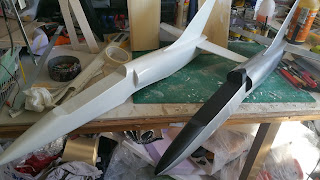 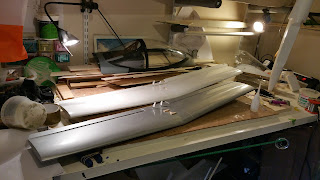 The L59's are quite far along, with just some cockpit fitment to go.  After that the white one is to have a camo job in "similar to my Hog", and the silver one will receive a bit of red vinyl to look like a Czech machine.  Lots done and lots to go - I just hope there's enough hours in the day! 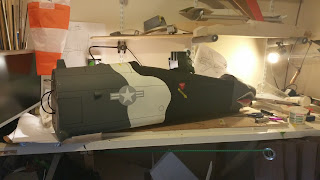 Speaking of Hogs, mine has had a little fettling, mostly with decals and paintwork.  It's my intention to get the rear fuselage white patches resprayed before the weekend, as they have gone a little yellow over time.  Only on that section though, which is strange.

And so, onto the weekend's PSSA flying.  So far (touch wood) the wind looks great, and we should see something in the region of 50-60mph on the edge.  That'll frighten all those new A4's, I'm sure!  There looks to be some rain blowing through on both days, but with some luck, we'll fly in between them.  I am again extending my stay to Monday too, which yet again looks like the best day.  Weird that?!