Firstly, the Fouga.  I have made up a small servo tray that will carry both mid-sized servos for the vee-tail (Corona 339HV - metal geared, digital, high voltage capable), which will be glued to the fuselage floor.  A long thin plate is screwed in over this to hold them both in the bracket.  I glued and glassed in the final former last night, so the fuselage is nearly done. 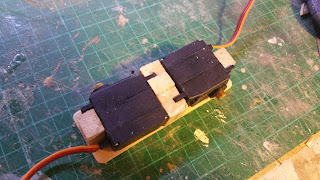 I have decided to change the way the wing is constructed on the IL102.  Instead of adding more foam for a centre section, I have decided to use the centre tray as an integral part, and add a second shear web / spar made of 1/16th inch birch ply.  This whole assembly can then hold 3 servos comfortably (2x aileron / 1x bomb drop), and be covered easily as it is now. 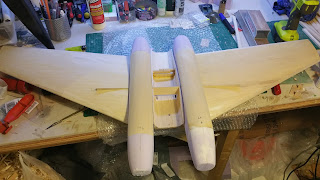 So that was a dry-fit, parts have now started to be glued together : 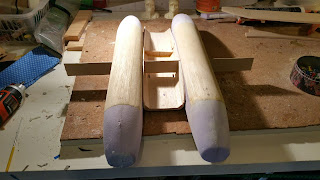 I also ordered up a nose light for the Fouga yesterday, along with all 5 landing lights for the C17, as well as more servos and LiFe batteries for the new builds.  Phew!