A little bit of everything - Fouga, C17 & Valkyrie

The final few parts of the C17 nose shaping and planking were becoming too much like hard work, so I moved over to do a bit more work on the Fouga and Valkyrie.  Truth be told, I was a bit stuck in forming the last parts of the undercarriage pods, so I always find it helps to have another build or two to distract you.

I have now painted the cockpit wooden parts in two thick layers of floor varnish, so it should now be ready for primer at the weekend : 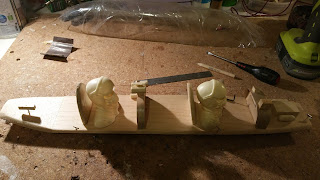 Then as I knew there was some P38 filler required on the rear end of the Fouga's fuselage, I mixed up extra to get rid of a couple of dings on the Valkyrie fuselage.  These dings were actually caused by me pushing on the fuselage when trying to remove an alloy spar rod that had "picked up" and locked itself into the alloy fuselage tube.  Oops!  This has since been remedied by a heavy steel version, and a lighter carbon one too. 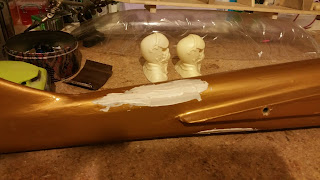 Then I had a brainwave!  Small, cross-grained sheets could be patched into that pain of a pod on the C17.  1 hour later, I had the nasty niggle nullified.  Here it all is in it's rough-hewn glory, before sanding or filler : 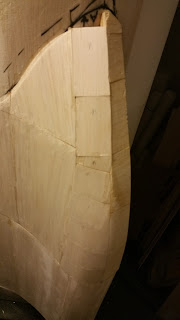