A bit the bullet at last and bought a new trailer for model transportation.  The biggest problem with my old trailer is that it wouldn't fit the U2 fuselage, and now that there are some bigger airframes coming through that I'd rather not have inside the living space, I thought the time was right. 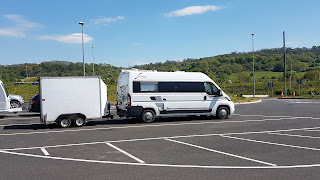 Dual axle (for a bit more security on the road), with space to fit the A10, C17, FW190, U2, Vulcan, M55 all at the same time, plus lots of smaller models.  It'll have racking for the main aircraft listed above, plus lash-down points for the glider tug, as well as a water carrier, space for the generator, and room for the gazebo too.

I recently went on a servo purchasing spree, so thought I'd line up the hardware for a quick picture!  This includes servos for the C17, the Ilyushin, the Seahawk, the big Fox, and the large FW190 (that I've not really mentioned on here as yet). 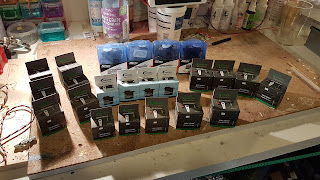 I've just had RCM&E's June edition through the post - what an amazing slice of  PSSA coverage!  6 pages of text and pictures from the Orme, which has to be one of the quickest turn-arounds for event-to-magazine that I've seen.
Posted by Andy at 06:43