In 1995 Simon Cocker made a rather large PSS glider - the Antonov An-225 Mriya ("Dream").  At 6m span, she made it into the Guinness Book of World Records. 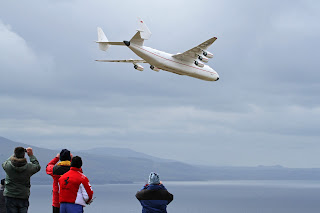 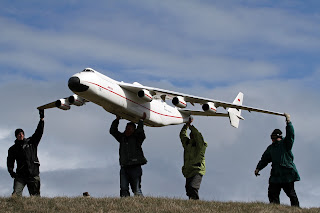 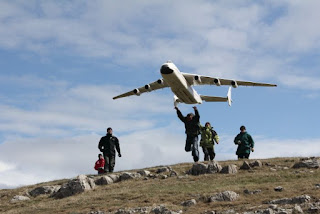 Alas, in about 2006 the model suffered a crash on finals when the forward hatch blew open which resulted in a large un-commanded yaw manoeuvre.  The aircraft would not respond quick enough to corrective action, and she went in at just below cruise speed.

The aircraft punched clean through a bush that slowed her a little, then parts starting hitting the ground.  The nose hit hard, and pulled the mounting hardware clean out of the main fuselage section, pivoting backwards and leaving a large gash in the port LE.
Next, the main fus section hit more or less straight in - this was the big hit.  The main bulkhead ploughed  through the soil then fractured halfway up, blowing out a large section of the bottom of the fuselage.  This shock load flexed the wing tip panels so hard, the scarf joints cracked in the spars and the veneer creased on top.  The entire fus flexed, creased the veneer in 4 distinct lines, then righted itself. The tailplane also suffered here with a flexing stress crack of the veneer.
Most of the weight of the plane is the centre wing section - this carried on going forward, pulling the bolt plate clean out, fracturing a large 1/4" birch ply tongue, and shed all the engines.  5 out of the 6 engines were damaged, one badly.  The fins - nearly 2 foot high each - were completely unscathed from the crash.

When I picked the aircraft up she was in a sorry state, having sat dormant in a garage for the best part of 12 years since the impact.  Simon and some of the PSSA guys had managed to clear the crash site rather well, and just about every part was recovered though - making the rebuild a fair bit easier.

I have taken pics of most of the repair process, and probably wont blog them all, but here are a few. 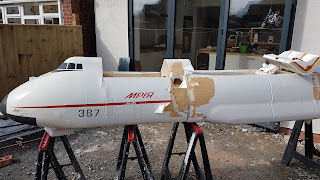 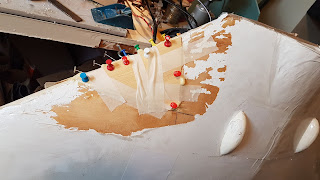 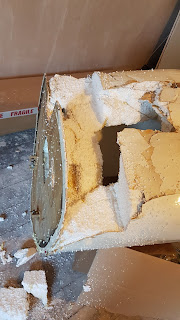 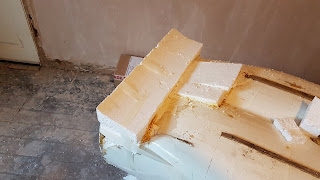 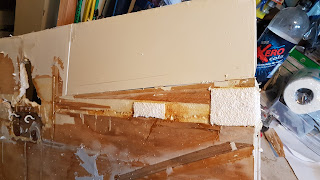 This has put a big dent in all the other aircraft builds and repairs, but they'll all get done, eventually.