Well, here I am again wondering what will end up on the building board next.  I have a couple of refits to finish (F4 and Hunter), as well as the Flanker and the Sea Hawk (both coming along great) - so should I stop there?  Of course there is a 1/12th scale B24 that I really want to get airborne too, but as mentioned before, I'm not sure if that will end up PSS just yet.

As it's the PSSA's 30th anniversary next year, I wanted to get either an Alan Hulme Gnat, or the mass build Skyhawk built too in the new year - maybe both?

Then I still want to build something "EPSS" to cope with those times there isn't any wind blowing, so maybe I should concentrate on that before the season gets going? I am pretty sure that will end up a 3 metre span M55 Mystic - I intend to start the drawing of that today.

Then what happens to my other bits and pieces I really wanted to get done?  Perhaps I should move the 6th scale Me262 back to 2017, along with the Sukhoi PAK FA T50 and the large scale B36D.

So yesterday to make even more confusion, I drew up a 2.5m long / 2.1 m span B1 Lancer, that really gets the juices flowing : 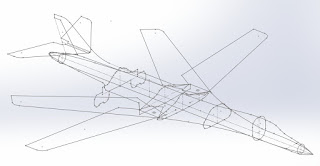 Ugh.  I need to retire soon so I can get all this building done!

I will get plans drawn up for everything and then worry about it once I have the Flanker and Sea Hawk done.  I will upload some M55 pictures soon as I progress.