Here are some pictures of the second wing (I won't refer to them as L and R, as I can't remember which one was first) under the scalpel this lunch time.  A quick cut down a straight edge sees the back of the TE pop off to the same depth as the aileron. 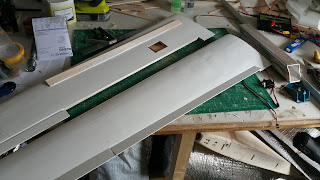 I had a quick go at peeling the cover off of the new flap, but I will do it properly tonight before covering it. The square that is cut out for servo access has the covering peeled off, rotated through 90 degrees, then glued back onto the inside of the top skin with thick cyano.  This acts as a localised doubler and servo mount reinforcement.
At the bottom of the image you can see the new flap with its film hinge in place (OK, it looks like the left wing...probably). 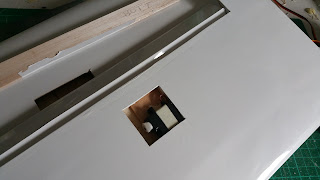 Here is a close up of the underside.  Time to mount the horn, make the link, and this panel is done.