[Wow - non PSS content again!  Hopefully this will be the start of me moving back to proper scale gliders and aerotows again]

About 18 months ago I first flew my small Salto - straight into a tree one day, then into a flagpole the next.  It wasn't a happy time, but when you love the shape of an aircraft so much, you just had to persevere.

About 12 months ago I had re-joined the wing that the flagpole had eaten, and re-covered it ready for another flight - this time it's first successful long flight at the Bwlch.  This particular Salto lands like a bullet, and didn't have great roll authority, so I hatched a plan to add inboard flaps.  After readying all of the PSS fleet for the Orme event last night, I decided to execute that project.

Only 1 hour in, and the repaired wing has it's TE removed and a servo box cut-in.  A spare 9g servo is pressed into service as a flap actuator.  In this image you should be able to see the long, tapering skin join that denotes where the repair was made.  Covering here was  a bit of white solartex, so it popped off easily. 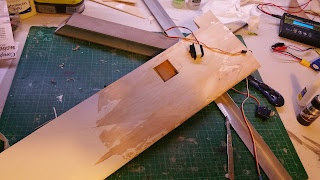 This is the other wing panel, showing a "before" shot of the long skinny wings and the small ailerons. 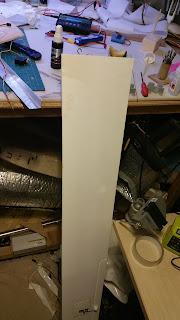 An hour or two later, I had the first panel re-covered, including live Oracover hinging.  Just the horn to sort, and the other panel will go under the knife.

After this, the forward area of the fuselage will have some lead removed, and replaced with a heavy carbon-fibre cloth bathtub, much like I did on my 1/4 scale Pik20 : 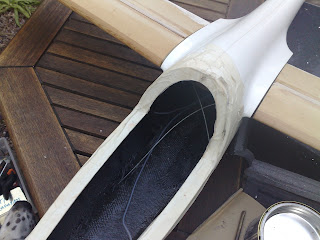 This means that the aircraft will be carrying strength instead of dead weight.  After that, I will add a nose-release for aero-towing, just in case there is a day with lots of Salto-supporting boomer thermals about!

More images later of the flap install, and then I really fancy getting the 3rd scale Salto out the loft to work on...