At the weekend, I found this lovely little glass-and-wood F15C on one of the trader's stands.  I did like it, and so did Shona.  After walking away, I asked her to go back and make a cheeky offer for it - she did, and it worked! 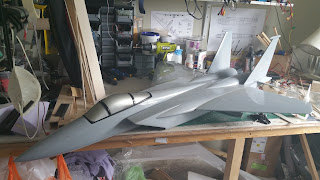 Lovely isn't she?  It's from a HET kit, that would have been for EDF, but we'll have none of those noise makers in this little birdy thankyou!  The fuselage is all lightweight glass mouldings, including the verticals.  The wing is fully built up, and the taiplanes are solid balsa.

Mod's will be quick and simple :


I was going to go for a fancy Japanese aggressor scheme, but I've had enough of complicated spray jobs.  This will most likely be 2-tone tactical grey, just like what can be seen flying through the Mach loop.