A good time on Sunday with some great flying on the Bwlch. The Fox maiden went well in the end on her second launch, unfortunately she managed to get away from the launchers first time round before they'd pushed her much, but I landed OK on top of the hill with no damage.

After that it was all gravy!  The skies were a bit grey and with the CofG on the rearward point, I landed her after about 20 minutes.  Happy to say the brakes work well, but I had a CFIT moment and scuffed the fuselage on an access track around the tail wheel mount, and snapped an elevator linkage.

Quite a strange failure, but at least she flew and I think it's a keeper for now. 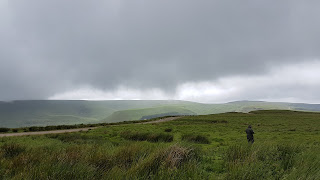 The highlight for me was my F104 flight.  33mph with 50+ gusts, and she handled it very easily.  It was wonderful to see her on only her second flight grooving around with very axial rolls, and quick height gain when required.  As expected though, a tip tank was damaged on landing, so one flight was all she got.  I think I have a solution for the tip tanks to be easily knocked off but sturdy enough to stay on in flight - as the damaged tank is already repaired, I will try and incorporate it before the Lleyn meet. 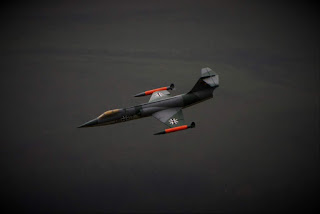