I had a good chat with Phyilis Cooke about the structure, and we came to a decision on what to do.  If the hook was to be attached with a beefed up former, then stresses would congregate elsewhere, deeper in the fuselage structure.  If I mounted the hook with a break-away two nylon bolt system, it may fail in flight, though I would dispute that there are no real aerodynamic forces that would cause that - this will be my fall back position if it fails again, which brings me to the used solution : 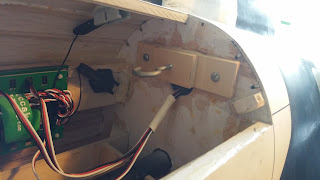 Just glue it back on!  Lots of epoxy on the back, and the two screws utilised again to hold it all whilst it dries.  Sure, the former may get pulled apart even more next time, in which case I can re-manufacture it's front face, and install a weak-joing for over-stress situations.  Perhaps be a bit more careful in my landings next time, eh?!

I just have to cyano the hatch-mount block back on, and she's cleared for flight again.
Posted by Andy at 03:45