First stage, cut out the wing seat and reinforce with hard 3/16" balsa.  This is wood-glued into the sides and clamped : 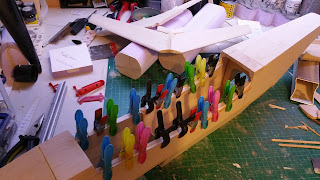 In the background you can also see the tailplane - now shaped - and glued together at the required angle (66mm dihedral under 1 tip).

As the wing is more-or-less mid-mounted, I will also need to have a tray mounted to the underside of the wing that will be come away with it when dis-mounted.  It's a nice snug fit at the moment, and here you can see it pushed back onto the fuselage with some markings on it : 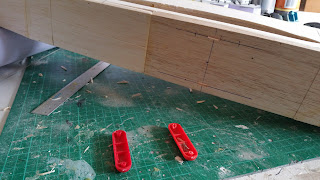 Yes, two SLEC bomb releases of course!  The '102 is a ground attack and CAS aircraft, so she will need to drop some ordnance.  Here the tray has been marked and slotted to hold the bombs.  These will be driven by a single servo in a staggered release pattern.

A weekend at home beckons, so other than a bit of DIY getting in the way, the wings shall be cut!